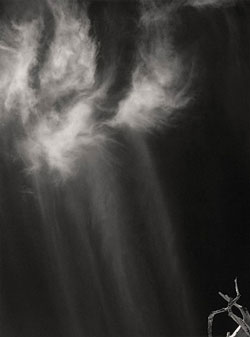 "...an American Master, possibly one of the greatest photographers of our time."

"LightBox is the only privately owned gallery in Oregon that shows only photography. The level of the work is exceptional.... downstairs is one of the medium's great masters, John Wimberley."

"Minor White's 21st century successor may well be Oregon's spiritually guided technical perfectionist, John Wimberley. To say that John is a landscape photographer is akin to saying Einstein was merely a math teacher. Here's a photographer who has incorporated photography into his being and life's philosophy, bringing an energy and insight that spark his imagination to craft images that move and inspire."

"He is one of contemporary photography's best technicians. But it is his spirituality and its profound connection to his work that sets him apart from many of his fellow photographers. Well known for his angels, he is also a master of the majestic black-and-white landscape photograph. Comparisons to Ansel Adams, the artistic godfather of many celebrated 20th/21st-century landscape photographers, are inevitable. It actually makes sense in Wimberley's case. Both are known for technical mastery and ability to illustrate nature's spiritual qualities."

"John Wimberley's photographs explore an arid and mythic landscape, where the three-dimensional plane is flattened, yet images retain form and shape and contour. The tonal range of Wimberley's prints draws the eye across these altered physical landscapes. Elegant and mysterious, the textured grey and pinpoints of black provide environments for the petroglyphs of single figures or groups of creatures. Like a native vision, these images evoke a sense of dreaminess, yet are anchored on rock and stone. The images are spiritual: of rock and stone, and something else entirely intangible."

"He has a truly great grasp of the moment....These are stunning images visualized by a dramatic and discerning eye"

"Wimberley's undisputed technical mastery of photographing and printing in black and white is but the springboard for visual poetry of spiritual realms....An outstanding example of his uncanny ability to convey atmospheric purity is Descending Angel...What remains unnoticed by most, as seen through Wimberley's eyes, becomes a powerful, mysterious invitation."

"Both photographers (Ansel Adams and John Wimberley) have a tactile sense of texture. One of the more interesting revelations in the exhibition is Wimberley's handling of the range of light.... Ranging from subtle to dramatic, Wimberley's works are not diminished by comparison. Wimberley acknowledges his debt to the master but constructs his own realities."

"There is something more than technique, though, that separates Wimberley's work from the realm of the ordinary. His photos possess a transcendental quality....The 51 gelatin/silver prints are a sure sign that the artist has begun to emerge as a serious photographic innovator."

"Wimberley's prints are spectacular in the best sense of the word. These black and white photos of extraordinary depth and luminosity capture restricted but imposing chunks of landscape....But instead of coming back with a merely picturesque result, Wimberley makes a photographic record that penetrates directly to the mysterious forces behind natural forms. Wimberley succeeds in portraying objects....that compel us to surrender our consciousness to them."

"With great sensitivity and an unerring eye, Wimberley is able to evoke the experience of the land....Timelessness, a sense of the infinite unsullied by man is pervasive. Wimberley has created a series of conspicuously attractive photographs.

"The first thing that one is made aware of....is that the photographer, John Wimberley, is a craftsman of the highest order. His prints are not merely technically correct, but wonderfully alive."